RWC’s tagline is “we believe in the power of words.” We’re promoting this concept further by making “power of words” the theme of our first flash fiction contest. In 1000 words or less, write a story that showcases how words make a difference. Think about how words heal, save, or defend, but also how words can sabotage, belittle, or ruin. Words between lovers. Words between friends. Words between strangers. Words between family members. Words your character speaks to him/herself. Write about communication and miscommunication, about late-night secrets, and early morning arguments. Write about outrage or sorrow or joy or excitement and the words that make those emotions matter. Besides the easy-to-follow guidelines listed below, there’s one big rule for this contest that matters most of all: the “powerful words,” the “words that change everything” must be spoken or thought by a character. That’s right, “using quotation marks.” Or, if your character is thinking these powerful words, they can be italicized.

We are pleased to announce the winner of the first

“Roses of the Glen” by Jan McDaniel

Jan’s prize includes a week-long residency at Rockvale Writers’ Colony and publication of her winning story here on our website.

You can read it below.

A Note from the Directors:

When we first came up with the theme for this contest, “The Power of Words,” we knew that we were going to encounter stories with incredible impact. Many of the submissions we read included themes of illness, abuse, death, and addiction, and each of these pieces resonated with us in different ways. We are so thankful to everyone who shared their hearts with us.

“Roses of the Glen” stood out, in particular, for its powerful sense of optimism. Despite the mental deterioration of the main character’s husband, she maintains a certain resolve that is astoundingly beautiful. The powerful words in question, thought by the narrator at the very end of the story, “the words across our separate worlds connect us,” suggest to the reader that the story doesn’t end here – that there is still some hope to be found in the smallest and seemingly most insignificant connections that still hold this couple together.

Holding onto faith amidst illness and loss is not always an easy thing to do, but oftentimes it is the only choice aside from giving up. While we can sense the internal struggles and sadness of the main character throughout the entire piece, these powerful words remind us that she is not going anywhere. Sometimes, strength is something that we must choose. Sometimes, we must force ourselves to believe in the good that we cannot see. And even when we know we’re probably not headed towards the happiest of endings, we must find the good in the moments that remain.

The segmented parts of this piece invite us to view varied snapshots of time and relationships, reminding us that there’s always more to the story than what can be shared with us directly. There is some room for wonder, curiosity, and assumption. We have all dealt with loss, survival, and family at different points in our lives, and not much needs to be said for us to understand these themes even more deeply than the story “tells” us to.

In speaking with Jan, we learned that this shorter piece is, in fact, a segment of one of her upcoming novels, based on true events she has experienced within her own life and relationship. She wanted us to know she was grateful for the experience of entering this contest, simply because it encouraged her to keep working and make significant progress on her forthcoming full-length project. We wish her the best as she continues reaching towards her writing goals.

Roses of the Glen

Lying somewhere between wakefulness and sleep, I listen to the sounds, uncertain little pings and taps, as I draw the pillow close beneath me, unsure if it is raining in my dreams or if the drops fall on the weathered deck outside. These naps are the closest I come to sleep anymore.

Jesse’s voice comes from down the hall, muffled but sounding closer with each word. “Rosslyn?  Are you awake?”

I lie still as long as I can, until the counterbalance of his question comes again, this time from right beside the bed.

“Are you asleep?”  He speaks softly, as if some thought is given to my rest but with hope implied that I will hear and respond.

“I don’t think so,” I reply.  Somewhere in the house a fan clicks on, the blades’ constant whir wiping out the splatters of rain. “What’s wrong?”

“Nothing new,” he says, his voice full of sadness.  “I miss Jaz.” He eases himself down on the bed beside me.

I reach for his hand and cover his fingers with mine.   “I know.”

He does not take to change.  He holds his life so tightly together, but children grow up.  That is the normal way of things. Even hard things. His world, so carefully and desperately constructed, no longer requires his control.  Jaz doesn’t need us so much anymore, but that is not the only thing that has changed.

We lay this way for a few minutes, the sounds of the fan and our breathing the only noises disturbing the quietness.  “Is it raining?”

“It must have been a dream.”  I move closer to him. “Are you alright?”

We speak this way now, in short, staccato revelations of only the most required information, the most mundane.  Query, response, generalization. Uncertainties. Nothing that would hurt too much. My eternal optimism is a memory, and he is helpless.  It is a situation unreal to me and unbearable to him.

“You can’t carry it all, Jess,” I tell him.  “It’s too heavy. It will kill us. You have to figure out a way to lay it down sometimes.”

My hand brushes up the length of his arm and across his shoulder, and he moves closer, his head on my pillow.  A few minutes later, he drifts toward sleep in my arms. Blessedly, the peace lingers until almost twilight, when evening sounds began.  Somewhere outside, an elusive rain crow calls.

“It’s going to rain,” he whispers, without opening his eyes.

In recurring dreams that come to call, I drive over a gravel road, beside a barbed wire fence, winding through a peaceful countryside, partly forest and partly open land.  I am alone in the car, and young, yet I can hear somehow the soft noises of my children coming from the back seat, Jaz and Sera. The baby was still with us then. Weeds along the roadsides grow taller than the car, and I am so close to them I can smell their drying hay smell through the open window. I feel them blurring by, out of the corner of my eye, and hear the gravel crush beneath the tires.

Flat pasture turns into rolling hills, still fenced, my face awash in the sun’s warmth. Happy.  Drowsy. Cumulus white clouds light the blue sky with dazzling, puffy islands. Then, almost missing it, I look back toward an old farmhouse tucked into the shelter of a curve in the earth, painted red and half-hidden by high grass.  Soft wind stirs the wild fronds, the movement drawing my attention. White letters on the side of the house, obviously abandoned, spell out the name of the place and then a few rows of a message below.

Roses of the Glen. That’s what my dream shows me.  I can never read the rest. The car continues. I could apply the brake if I only thought of doing so, but I don’t think.  No thought of turning back to read between non-seeing windows comes to me until it is too late. The dreams always end there anyway.

More and more lost, Jesse is like a child.  I try to explain to Jaz on the phone.

“What do the doctors say?”  She sounds very far away. And she is.  A thousand miles.

“Doctors can’t seem to help him.  Tests. Medications. Those only make him worse.”  I hesitate. I don’t know how much to tell her. “His mind fills with hallucinations, memories from old wars.”

“I don’t understand.  Just tell the doctor when that happens.”

He is a stranger; rarely I glimpse the man I used to know before he leaves again, his brilliant mind aflame. I am alone in a new universe with the knowledge, holding the phone and my unspoken thoughts.  Our lives have flourished and faded, drowned now and ended. Not a sudden end – no – but a long, low moon of death that wanes in a thrashing struggle toward the night.

On Dauphin Island, I leave him angling in the surf and wander down the shoreline toward the pier and Little Billy Goat Hole, everything pink as I return.  I catch my breath. He stands tall and casts his fishing line, waist deep in water that rocks him gently with the tide. The sky, the water and the sand grow into a blend of one color – one pink, then one blue.  All one, as if the water is made out of sand and the sand is made out of sky. Dog flies sting and plovers outrace the waves, saying “Take me. No. Take me; no, don’t.”

In darkness we watch the stars appear; I lean against the lovely, solid hardness of his body.  At moonrise, he speaks about Mare Imbrium as he used to while I keep one last thought: the words across our separate worlds connect us. 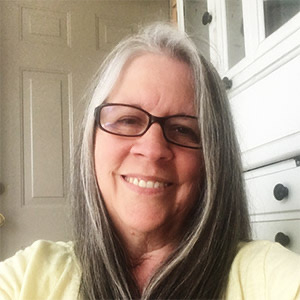 Jan McDaniel is a writer living in Georgia and has been writing since she was six years old. A former newspaper reporter and college English instructor, she is now a blog columnist, web content provider, and online forum moderator, but her first writing love is fiction. On her website, Jan writes about survival, connection, and hope for people who have experienced traumatic loss. She has several novels in progress. You can read more of her writing at wayforhope.weebly.com.

Get to know Jan a little better when you hear her Porchside Chat with RWC Director, Sandy Coomer!